In March 2017, beside organizing a awareness camp on various Prime Minister schemes at Babina and celebrating International Women's Day at village Khajaraha Khurd and awakening the young girls and women of the village to came forward and get ready for a new dawn, we worked for NABARD under a new Project d-FLAPs (Digital Financial Literacy Awareness Programs) for which we organized 25 d-FLAPs in Kolaras block of Shivpuri district of M.P. with the active participation of bankers of the region where we taught the villagers the advantages as well as usage of cash less transactions, Aadhar linkages, Mobile linkages, Pradhan Mantri Suraksha Beema Yojana, etc. Villagers took active participation in the camps and took benefits from these camps.
Apart from these, we focused on young girls to help them making capable of taking important decisions of their lives like right age of marriage, right age to bear motherhood, their role in both the families, raising their voices against harassment, domestic violence, etc. through a program called 'Meri Sehat Mera Nirnay' in association with National Health Mission, Jhansi Unit. This program was conducted in 10 Government Girls Inter Colleges of Jhansi district covering around 2000 college girls. 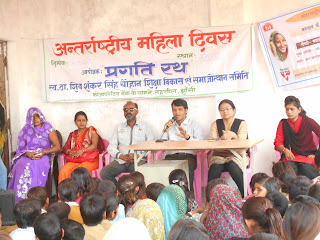